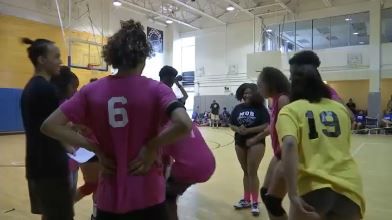 A volleyball league run by off duty members of the NYPD, FDNY, EMS, and Department of Corrections, mentors youth from the Bronx.

It started three years ago with 50 teenagers and now has nearly 200 enrolled.

The youth players say having this experience gives them a new appreciation for the city’s first responders.

“People say cops are scary, there’s so many bad things about them like they have a bad reputation,” said Melody Pabon, one of the volleyball players.

But Melody says getting to know one of the officers gives her a new perspective.

Matter of Sports hopes to add a dodgeball league this year.